Reading notes: Economic Rules, The Rights and Wrongs of the Dismal Science by Dani Rodrik
Quotes that could give us some ideas and opinions about the economic models used by economists and why not, to motivate you to get more insights in this regard by reading a good book.

Real-world markets are imperfect, unlike those envisioned in economic models. Economic models assume the participation of rational actors, but people do not behave in a rational manner. 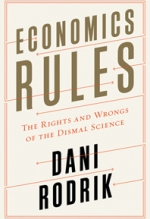 Economics is a science because it employs the use of models. Economic models identify probabilities, regularities and tendencies.

“Economics is a social science, and society does not have fundamental laws – at least, not in quite the same way that nature does.”

Economic models can be simplistic, formal and, often, unrealistic. A model focuses on the most germane element of reality, given the context. Models tell a simple story with a clear moral. The underlying principle is that different models are appropriate to different contexts, but economists often go astray by neglecting that principle.

– Economic models are often mathematical, but mathematics is not indispensable to economic analysis. In fact, game theorist Tom Schelling won the Nobel Prize without relying on mathematics. Yet some practitioners pay more attention to mathematical models than to reality.
– Computing power and the big data phenomenon enable economists to deal with more complexity than before and may render traditionally simple models obsolete. Economists have not yet been able to produce a useful large-scale economic model.
– Too much complexity can make a model irrelevant, while simplicity makes economic models more useful.

“Too many economists fall in love with the math and forget its instrumental nature.”

“Too many economists fall in love with the math and forget its instrumental nature.”

To discover whether financial speculation is destabilizing, whether cash transfers or subsidized education are good for the poor, and whether discretionary or strictly regular monetary policy is better, you must clarify what model you are using to answer the question and verify that the context of the question fits the model.

– Economic models, unlike the laws of physics, lack universal validity. Everything depends on their context, meaning that varying communities can react differently to the same policy. Nobel Prize-winning economists Michael Spence, Joseph Stiglitz and George Akerlof showed how less than perfectly competitive markets – especially those with “asymmetric information” – might produce different outcomes than perfectly competitive markets.
– The contemporary economics profession has moved away from assumptions of rationality and perfect competition. It now takes into account conditions in which competition is imperfect and information unequally distributed, and in which psychology – rather than cost-benefit analyses – comes to the fore.

Models make economics scientific, but the utility of this science depends on choosing the right models to apply to specific circumstances. For example, most economists failed to foresee the 2007–2008 financial crisis because they focused on the wrong factors and models. Many economists were concerned about the US economy, but most worried about the savings rate and the current account deficit. Few anticipated that trouble would come from the housing sector and the financial industry.

Existing economic models could have provided a clear picture of the economy and where it was going. These models could have explained bubbles and bank runs. Just the fact that mortgage security issuers were paying rating agencies for their ratings should have raised questions about the quality of those ratings, even among neophytes. However, instead of embracing models that could explain what was happening in the run-up to the global financial crisis, economists relied on so-called “efficient markets hypothesis” models. This hypothesis says that because traders possess all available information, market prices reflect that information. The implication is that no one could have predicted the financial crisis. The fact is that economists put too much of their faith in markets.

– The failure of the Washington Consensus, which set out to use market forces to free Latin American economies from restrictions, exemplifies economic policy makers’ improper application of models. The Washington Consensus emphasized privatization and trade liberalization as blanket solutions for developing countries. But, without the “rule of law, contract enforcement and proper antitrust regulations,” privatization provides windfalls to government cronies instead of promoting general “competition and efficiency.”
– The Washington Consensus model projected that reducing protective import barriers would shrink or shut down internationally uncompetitive companies and would release resources for more efficient economic sectors. Latin American and African firms collapsed after they lost import protections. They did not reap the anticipated benefits. Asian countries that departed from the consensus – by establishing industrial policies, subsidizing and protecting domestic manufacturers, and developing regulations to maintain international currency competitiveness – fared better.
– The Washington Consensus prescribed a universal remedy for all developing nations, even though their conditions and needs were diverse. No one paid sufficient attention to “local context.” The real world of imperfect markets did not fit the assumptions of the model.

Stanley Fischer, former IMF chief economist and deputy to the managing director, thought it was worth taking the risks of panics, crashes and economic pain associated with liberalization. He hoped unrestricted capital flows would result in a more efficient allocation of resources. Better economic management and financial regulation could presumably manage the risk of instability. Although he lacked evidence to prove that financial liberalization would benefit developing countries, Fischer thought the proof would come in time. Such failures have led economists to recognize that they must carefully determine which model fits each particular need.